Herbs for Indigestion How to Survive Seasonal Affective Disorder this Winter

One of the best pleasant surprises diabetics find these days is that there’s another superfood that can help them gain better blood sugar regulation. One of those surprising foods is bitter melon for diabetes. You may have seen bitter melon at the farmers markets in your local area.

Bitter melon is actually a bit on the ugly side with its random bumps and even thorny like projections. Yet, you have to look beyond its ugliness to get to the reward of blood sugar regulation. Bitter melon’s official plant name is Momordica charantia, and for centuries it has been used for diabetes and to lower not only blood sugar levels but also glycated hemoglobin (HbA1c) levels.

Doctors in China, Taiwan, Korea, Africa, the Amazon, and the Caribbean have known about bitter melon’s blood sugar regulation properties.

In fact, those living in these cultures may even incorporate bitter melon into their diet on a regular basis. They make this superfood into a functional food, one that is both eaten for daily sustenance and one that offers some medicinal healing properties.

For example, in this mixed vegetable dish, you can see that the bitter melon has been sliced and the seeds and inner membranes of it have been removed. Then it was added to the mixture of other vegetables, herbs and spices. It’s common to add pork or eggs to dishes in the Orient that contain this superfood.

Bitter melon’s taste is not like anything else you have ever tasted. It’s always cooked, has a crunchy husk and a cucumber-like texture on the inside.

According to PasteMagazine.com, it tastes a bit weedy and alkaline. The alkaline taste is neutralized by yogurt, lemon juice, tomatoes and/or salt before cooking. Spices used with bitter melon tend to include fennel, cumin, masala, coriander, and fenugreek seeds. 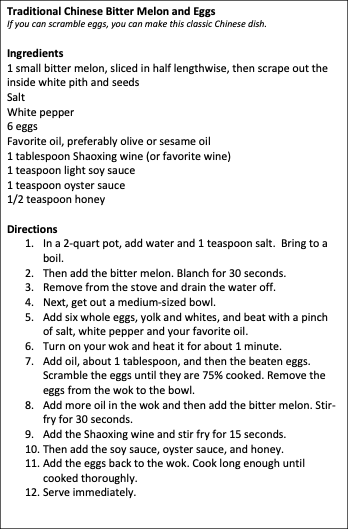 How bitter melon helps diabetics was reported in the medical literature from about 1982 on.

In 2011, Thai scientists published a report in the Journal of Ethnopharmacology journal of a 4-week study of different doses of bitter melon (500 mg, 1000 mg and 2,000 mg per day) in people compared with metformin.

The highest dose of bitter melon significantly reduced fructosamine levels but the response was less than metformin at a dose of 1,000 mg/day. The changes in blood sugar were not reported although a modest hypoglycemic effect was reported.

Natural herbs and foods with diabetic action often have a direct or indirect effect on diabetes pathways as enzyme inhibitors. Here’s a list of some of the ways foods cause antidiabetic actions:

• synthesizing and releasing of insulin

• lowering the level of skeletal hexokinases

Bitter melon increases insulin secretion of the pancreas, decreases the amount of glucose the intestine is taking up, and increases uptake and utilization of glucose in the peripheral tissues of the body, according to one German research team at Justus Liebig University in 2014.

Other Studies on Bitter Melon and Diabetes

In 2020, Korean researchers published their randomized, placebo-controlled study of 90 subjects taking bitter melon for 12 weeks. The doctors found that 12 weeks wasn’t long enough to change the hemoglobin A1c levels of the participants but it did decrease the average fasting glucose levels. They concluded that bitter melon has glucose lowering effects in patients with type 2 diabetes.

In Taiwan, researchers found even better results. Their study included 142 diabetic patients, split between a bitter melon experimental group and a placebo group. They specifically tested a particular bitter melon peptide found in the superfood that was given to patients.

At the end of the second month, there was an average drop of Hemoglobin A1c from 7.8 to 7.5. The A1c fell another 0.1% by the end of the study. There was no change in the A1c levels of the placebo group.

In the same year, Indonesian researchers were working on an animal study to see if a probiotics fermented bitter melon juice would hold any promise for type 2 diabetes. They found that bitter melon fermented with Lactobacillus fermentum, the blood sugar lowering results were better than by using the bitter melon by itself.

Other Properties and Healing Benefits from Bitter Melon

Momordica charantia doesn’t only have blood sugar regulation properties. It also has been shown to contain bioactive chemical constituents that offer other health benefits.

The list of some of these bitter melon benefits includes:

Bitter melon is one of the superfoods that may be eaten in the regular diet for a number of health benefits. Eating it in wok dishes, soups or stews could make a difference in blood sugar regulation and could be considered a lifestyle modification for many diabetics.

Always work with your doctor when incorporating foods that may lower blood sugar levels to prevent hypoglycemia.